Water supply contamination is complex and community water systems are subject to multiple means of contamination.

Any behavior, custom, or process which brings pathogens found in human feces, into contact with the mouth, can result in water supply contamination and be a vehicle for transmitting disease.

This might sound strange, at first, but in places where adequate sanitation and hygiene are not practiced or available, people become exposed to pathogens found in human feces.

Poor practices present open pathways, from human feces, to animals, to flies and insects, to food, to hands; all of these can bring pathogens from feces to mouth. So transmission of pathogens can be accomplished through:

Flies and other insects

The number of people living without clean water is staggering. According to the progress report of the WHO/UNICEF Millennium Development Goals, the number of people without an improved drinking water source has decreased from 1.1 billion to 884 million since the 1990’s.

Sub-Saharan Africa holds one-third of these people using unimproved water sources and living with water supply contamination. Worldwide, 8 out of 10 people who do not have improved sources of drinking water live in rural areas. 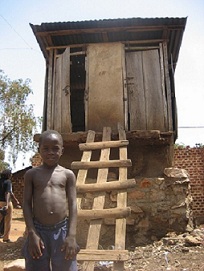 Preventing water supply contamination requires a multi-faceted solution that is complicated by many social and cultural concerns.

Household water handling practices, improved sanitation facilities and practices, and proper hygiene, all work together to improve water quality and reduce the risk of disease transmission; to eliminate potable water contamination and death and disease caused by contaminants and water-borne pathogens.

Organizations that have been successful in bringing about real, lasting, transformational development have almost universally adopted the WASH concept. That is, Water, Sanitation, and Hygiene. Read more about this under “The Solution”.

Return to "The Problem" from "Water Supply Contamination"