There are many types of water contamination.

Water is considered contaminated if it contains levels of introduced pollutants which render it unsuitable for or unable to support a human use, such as being used for drinking water, or pollutants that alter its ability to support the biological life within it.

Natural phenomenon such as volcanoes, algae blooms, hurricanes, and earthquakes can cause the introduction of contaminants into the water system.

Man made causes of pollution include chemical contamination from a variety of municipal and industrial activities.

When considering safe, clean drinking water, however, the types of water contaminant of chief concern are of a biological nature, and include human fecal waste. From human waste comes disease causing bacteria like E. coli and numerous other deadly pathogens that not only cause disease and death, but also impair social and economic development. 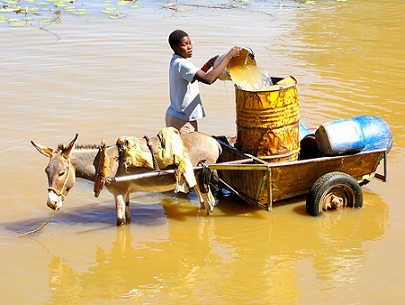 Rainwater, in itself, is usually safe to drink, unless it is found in an area with particularly severe air pollution. Catching rain is fairly simple and it is possible to collect and store rainwater from roofs or with other rain catchment systems. It is always necessary to have a clean storage vessel for rainwater and it is advisable to treat rainwater before drinking. It is also necessary to have the capacity to store large amounts of rainwater to assure adequate quantities are available during dry seasons.

Surface water is the most recognizable source of water and is easier to contaminate than groundwater. Rivers, streams and lakes are examples of surface water. Rainwater runoff is one of the major types of water contamination. Rain water runs along the ground and can pick up things like human and animal feces and harmful chemicals and deposit them in rivers, streams and lakes. Any surface water that is to be used for drinking is often unsafe and must be treated before drinking.

Groundwater is usually safer to drink than surface water. Water found underground in aquifers must filter through layers of soil. The soil acts as a natural filter, filtering out harmful pathogens and chemicals. Groundwater found deep underground (more than 10 meters) may well be protected from many types of water contamination and be safe to drink. Geology and soil makeup effect water quality, since the introduction of water and oxygen can cause mobilization of some harmful chemicals found in the soil. Such chemicals include arsenic, selenium, and boron.

Sources of surface water contamination can be categorized based on their origin.

Point source water pollution refers to the types of water contamination which enter the water system via one certain, identifiable source, such as a pipe or a ditch. This type of contamination source includes municipal sewage systems and industrial and construction sites.

Contamination of surface water by storm runoff which carries disease causing pathogens, is another example of non-point source contamination. This is often the case in areas where the inhabitants practice open defecation, or where improved sanitation is not available.

Click here to read more about multiple pathways of contamination.

Microorganisms commonly found in contaminated water, that can be sources of waterborne disease, include bacteria, viruses, protozoa, and helminths (parasitic worms).

Return to "The Problem from "Types of Water Contamination"